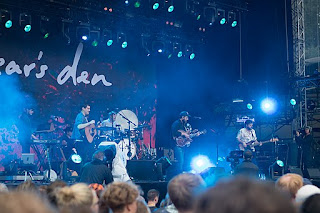 London folk rock band Bear's Den released new video, called "Crow", the video it self filmed in São Paulo, Nashville, London and Brussels, "Crow" dedicated to all guardian along with you, Bear's Den also take a write about the background of this "Crow" Music Video

“Hi everyone We are going to release a new song called ‘Crow’ in a few weeks and we are really excited for you to hear it. This song was written in memory of my Mum’s boyfriend who lived with us growing up.

He was like a second father figure to me but unfortunately he passed away when I was 15. We thought that a music video that celebrated the idea of family would be really cool.

So if you want to be in a music video we’d love you to bring your mum, dad, grandmother, grandfather or guardian along with you. We thought it would be really beautiful to film the reactions of you both just listening to the song together. We’d love for you to be a part of it.

Hope to hear from you.


Music in this video