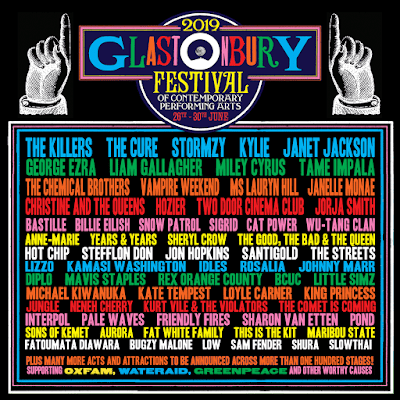 Glastonbury festival have some A list artist, Stormzy, The Cure and The Killers, Liam Gallagher, Janet Jackson, George Ezra, Miley Cyrus and Tame Impala Glastonbury Festival famed for its huge headline sets on its hallowed Pyramid Stage, which has recently played host to the Arctic Monkeys, Rolling Stones, Kanye West and Radiohead, it's the other side of the festival that really sets the heart racing.

Glastonbury Festival is a five-day festival of contemporary performing arts that takes place in Pilton, Somerset, England. In addition to contemporary art and music, the festival hosts dance, comedy, theatre, circus, cabaret, and other arts show. Leading pop and rock artists have headlined, alongside thousands of others appearing on smaller stages and performance areas. also Films and albums recorded at Glastonbury have been released, and the festival receives extensive television and newspaper coverage and live streaming online world wide.

Glastonbury is the largest greenfield festival in the world Visitors can take a stroll through Shangri-La – the festival's night time district – and you'll be thrown into a themed world full of immersive theatre and shenanigans, soundtracked by electronic music's finest and underground names with greatest musical skills