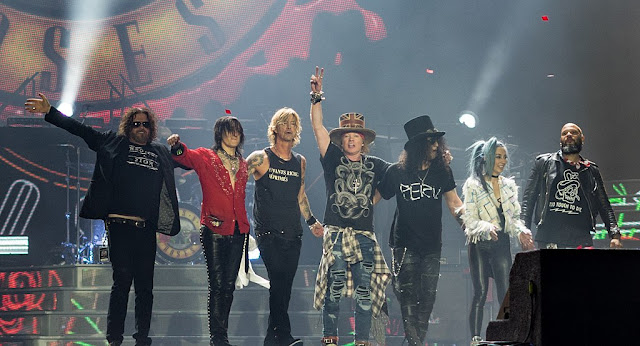 Guns N' Roses is working on new album, it is officially announced by their lead guitarist Slash, This album would be the first by the reunited band since 1993. Guns N' Roses are about to start work on their first album in more than a quarter century. Can't hardly wait how it becomes, According to guitarist Slash, the reunited band will hit the studio in the fall once their current string of dates wrap up on Oct. 13 with the Exit 111 Festival. Nice to hear this good news

Slash speaking to Detroit's 101 WRIF this week, Slash confirmed that the legendary metal icons are ready to get at it again. get some new working for brand new music ideas. "After those Guns dates we'll be working on the record," he said before his phone line went dead for four minutes mid-interview. "When we finish the tour in the fall then we will commit on working on the next Guns record.". "The thing is, we haven't really done anything yet, and I don't like to say anything. You know how people used to promote shit and lie through their teeth?" he told DJ Meltdown, initially skirting around a question about whether new music was on the horizon. "So I just wanted to be honest about it, and so there was really no telling what we were gonna do at that point. But at this point, I do know that we are gonna do this run [of shows in the fall], and we've already started working on stuff. So, there you go."

Slash also said, "Oh, it’s real, but the fun part and the cool part about Guns N’ Roses is we don’t really talk about it, and what happens next just happens," he said. "It’s never been that band that there’s a direct schedule of how we do things. I’ve heard some magnificent stuff that Axl has, really cool stuff he’s been working on. So I’m excited about the possibilities with that, of course. I don’t mean to get anybody rabid. Our day will happen when it happens, that’s for sure."