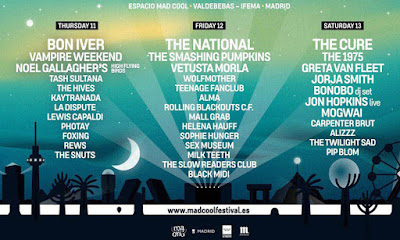 Hala Madrid, this music festival is taking over Madrid downtown, Mad Cool is a huge rock, indie and electronic music festival that takes place in the Spanish capital. The event organizer is now preparing for only its fourth edition, the three day festival has gone from strength to strength over the last few years, attracting crowds of 100,000 fans per day.

“Mad cool is working closely with a prestigious and renowned company in order to ensure the adequate functioning of the technical network,” a spokesman said. “In addition to this, wristbands bought online will be delivered anywhere in the world. “All ticket-holders (full festival ticket or a day ticket) are entitled to transport back to Madrid from the venue at Valdebebas, free of charge from 1.30am until 5.30am, aiming to minimise unnecessary waiting for any visitor.”

Bon Iver, The Cure, The National is one of the A list headliners, Mad Cool’s biggest draw is without doubt the huge lineup that they offer each year, featuring giants from across the globe. But combine that with the festival’s investment in sound quality, the almost guaranteed summer sun, and the opportunity to explore Madrid downtown afforded by the late start to the music each day, and there’s even more going for it than the acts on the list