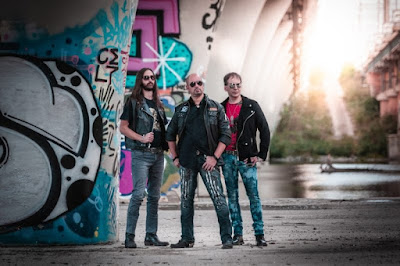 Another great news from Italian Music Scene, as informed by Art Of Melody Music & Burning Minds Music Group, they are glad to announce the signing of Italian melodic rockers, Saints Trade, for the release of their brand new studio album, "Time To Be Heroes".

Back to 2009, Saints Trade project was born in Bologna in 2009 with a great will to play music and a sheer passion for glorious Hard Rock bands. Soon, the band started composing its own material and performing live around Italy. Up and down, coming in and coming out some members, After some line-up changes throughout the years, the band got the great opportunity to play at Fleetwoodstock Festival (Fleetwood, UK) in November 2011, as opening act for famous British hard-rockers Ten.

The enthusiastic response of the audience to the songs gave Saints Trade an encouragement to enter the studio in April 2012 and record “A Matter Of Dreams”, their first mini-album produced by Roberto Priori (Danger Zone, Wheels Of Fire, Raintimes, Alchemy, Michele Luppi) at his Pri Studio. In early 2013, Saints Trade presented the official video for the song “Face In The Mirror” and opened for British rockers Jettblack in Bologna.