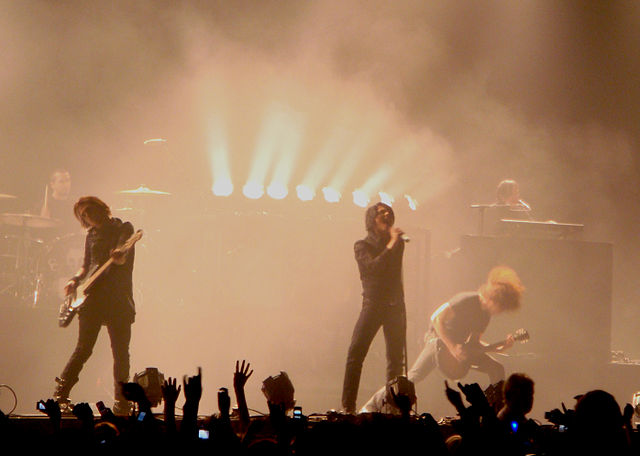 Welcome back my lovely emo band My Chemical Romance, this is a good news, The reunited MY CHEMICAL ROMANCE played its first concert in seven years last night (Friday, December 20) in Los Angeles Shrine Auditorium and Expo Hall.

My Chemical Romance band member Guitarist Frank Iero, vocalist Gerard Way, bassist Mikey Way and guitarist Ray Toro took to the stage at the 6,500-capacity Shrine Expo Hall with Jarrod Alexander on drums and kicked off the show with "I'm Not Okay (I Promise)". Gerard Way dedicated the gig to Lauren Valencia, MY CHEMICAL ROMANCE's former manager who died from cancer earlier this year. He added: "It's been a long time, Los Angeles. Thank you for being here tonight. "We didn't know if this was ever gonna happen again, so we really appreciate you showing up."

All fans from all over the world are happy, Since the announcement of MY CHEMICAL ROMANCE reunion on Halloween, the band has scheduled five more shows, including three headlining gigs and three appearances at the Download festival in Australia and Japan in March.

For your information MY CHEMICAL ROMANCE broke up in 2013, three years after the release of its fourth studio album, "Danger Days: The True Lives Of The Fabulous Killjoys". Since then, Gerard Way released his debut solo album, 2014's "Hesitant Alien", and several standalone singles. He also saw his award-winning comic book "The Umbrella Academy" adapted into a Netflix series. Last month, it was revealed that Way would be scoring Kevin Smith's upcoming "Clerks" sequel.